Taking Out the Catcher a Pete Rose Move … Need I Say More? 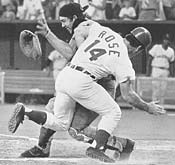 Most of us have given up beating our women over the head with a club, and dragging them off by the hair.  I believe we call this evolution.  The hit on Buster Posey has got me thinking about the evolution of baseball.  I think it’s about time.  Football has evolved.  It you make a helmet-to-helmet hit it will cost you $100,000.  Why?  Because it is dangerous, and we like to think that it matters not to kill our athletes.  This is not the freeking Roman Coliseum people, and these “gladiators” get to live to play another day, or game in this case.

My favorite story about a pig of a human being, betting or not, is about Pete Rose; baseball’s all-time hit king.  It is a home-plate collision with catcher Ray Fosse in the 1970 All-Star Game that gave the National League a 5-4 win in extra innings. That play — in an exhibition game, no less —screwed up Fosse’s shoulder permanently and changed the trajectory of his entire career. 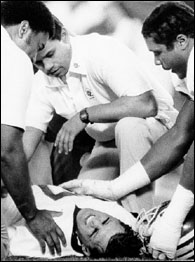 TB’s Elliot Johnson took out Yankees catcher Francisco Cervelli on a play at the plate and that resulted in broken wrist.

With Marlins catcher Brett Hayes blocking the plate, Morgan put his head down and delivered a solid shot, dislodging Hayes’ shoulder from its socket.

I still think giving yourself up when you are obviously out is better than throwing your forearms into the shoulder/head/neck region of the catcher. Again, you can’t do this at any other base, it is clearly against the rules (this wasn’t really any different than the ARod slapping the glove play), so why is it allowed in the first place.

The NFL recognizes that some plays are not in the best interest of player health or the game and try to cut them from play (though they can go overboard)…..MLB has this false sense of nostalgia about such plays, which no one can remember happening in the old days because players were required to slide.

Also, the argument that players will have to be retrained is silly. This type of play is allowed no where but in pro baseball in the US….not in HS, not in college. Players are already taught to slide when they learn the game….and MOST of them continue to do so or you would have 1/2 dozen of these collisions every single day of the season.

Buster Posey’s agent Jeff Berry:  “If you go helmet to helmet in the NFL, it’s a $100,000 fine, but in baseball, you have a situation in which runners are [slamming into] fielders. It’s brutal. It’s borderline shocking. It just stinks for baseball. I’m going to call Major League Baseball and put this on the radar. Because it’s just wrong.”

Berry said that he talked to both Joe Torre, leader of on-field operations for Major League Baseball, and the players’ union about the play on Thursday morning. Being that Torre is a former catcher, that must have been an interesting conversation.

The play was perfectly legal under the current rules, of course. But should it be? Should we be running into the first baseman to see if we can make him drop the ball?  If you hit the ump with your bat after you strike out can we keep them from giving the “strike” sign?  We have a $200,000 reward for senseless violence after a game, but encourage it during the game?  Lets drop our swords and shields and have a clean, pleasant contest.  The Pete Rose moves really don’t add to the game, and tend to “harsh my mellow.”

Grow up and leave the testosterone to the WWF or Arnold.  This is supposed to be a sport.

One response to “Taking Out the Catcher a Pete Rose Move … Need I Say More?”