RSS
← Is Your Office as Clean as it Should Be?
What Are the Most Difficult Languages to Learn? → 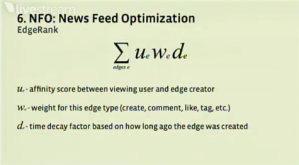 If you haven’t noticed, there are now two settings on your Facebook news feed: “Most Recent,” which shows most of the content published by your Facebook friends in chronological order and “Top News,” which filters content based on EdgeRank.

Friends and fan pages with a high EdgeRank are more likely to show in your “Top News” stream. Users with a low EdgeRank may not even show in your “Most Recent” news feed.

For businesses or others looking to market, promote or just interact through Facebook, the implications of this change are huge. “Top News” is the default setting, so unless a friend or fan changes their default, it’s quite possible that they will never see your updates. No matter how good the content, no matter how well you manage your Facebook page, EdgeRank might be holding you back.

Facebook looks at everything published as “objects.” These can be status updates, links, photos, video or anything else that can be shared on Facebook. Every object receives a ranking (EdgeRank), which determines if it will show in your personal newsfeed. Objects with a high EdgeRank appear in your “Top News” feed. Objects with a low EdgeRank will not. According to a study conducted last fall by The Daily Beast, objects with a really low EdgeRank may not even show in your “Most Recent” news feed.

Unlike Google’s PageRank, which stays the same from user to user, every object is scored based on the individual Facebook user who may (or may not) view the object in their news feed.

Let’s take a closer look at the three factors that determine EdgeRank.

An object’s affinity score is based on the interactions you have with the friend or fan who published the object. Friends or fans with whom you regularly interact receive a higher affinity score. Each time you visit a fan page, click the “Like” button, comment on a user’s status or look at a picture, you increase the affinity score with that user.

As The Daily Beast study points out, this affinity score only works one way. I can’t increase my affinity score in another user’s feed by constantly clicking on their “Like” buttons or looking at their pictures. Although doing so will increase the likelihood that you’ll see their updates, your objects won’t do better in their news feed until theyreturn the favor.

Different types of interactions are weighted differently on Facebook. Activities that require higher levels of user engagement get a higher score than those that don’t. For example, leaving a comment on a photo takes more effort on the user’s part than clicking the “Like” button. Objects that receive higher levels of interaction are more likely to show in a user’s newsfeed.

Most people don’t want to read yesterday’s news. Newer objects have a better chance of showing up in your news feed than older ones.

Armed with an understanding of these three elements, here are six tips on how you can increase the likelihood that your content or objects will appear in your friends’ or fans’ “Top News” feed.

Ever notice how political content on Facebook can generate a ton of comments? Although it doesn’t take long to realize that Facebook and politics don’t mix, people love to debate and discuss hot issues. Make your fan page a place for constructive discussion on the latest industry topics. Although this approach takes careful management, objects from a fan page filled with healthy discussion are more likely to receive a higher EdgeRank.

Objects such as surveys require user interaction which can build EdgeRank.

#3: Make the Most of Photos and Videos

Photos and videos show up in the Facebook news feed as thumbnail images. Due to their size, they almost require interaction as users click on them to make them large enough to see. Be sure to add a comment that encourages users to open the photo and add comments of their own.

By their very nature, videos and pictures encourage interaction.

An object that receives comments is more likely to show in the Top News feed and also builds affinity with users who comment.

The Facebook stream moves quickly. If you’ve got objects that aren’t getting a response, don’t be afraid to let them go and move on to the next thing. If the object is good but didn’t get the response you desired, consider repurposing it or sending it out again at a different time of day.

Don’t be afraid to ask users to share objects or click on the Like button—especially if you’re new to Facebook. It can take a little while for a Facebook page to gain momentum. Anything you can do to help it along will only speed the process.

← Is Your Office as Clean as it Should Be?
What Are the Most Difficult Languages to Learn? →