‘You look good in a tight skirt’: readers share their #canhesaythat moments

When Shoes of Prey co-founder Jodie Fox met a potential investor in a bar, he looked her up and down and greeted her with the comment “You look amazing”. Although she didn’t say anything at the time, she wondered to herself “Can he say that?” 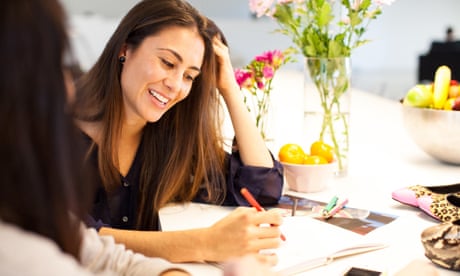 #Canhesaythat? If it makes you feel uncomfortable at work, then it’s (probably) sexism

When the remark was relayed to Guardian readers, most agreed it was inappropriate for a business meeting. Gabi in Rotterdam said: “Some of the commenters asked Fox how she would react if the compliment had come from another woman or from a gay man. That’s not the point. The point is, would hehave made that compliment to another man? It’s about his behaviour, not her reaction.”

It seems it’s an uncomfortably common experience, with many readers saying they had received comments on their appearance at work, sometimes said as a compliment, sometimes veering into questionable territory.

Many shared their experiences of subtle sexism in the workplace. They ranged from the “hmm” to the blatant to the eye-wateringly awful:

I recall once the suggestion that I ask a question of another team, in a very airy and innocent manner, hair-twirling and all, to try and get a more favourable answer than previously. I was (hopefully) expressionless as I simply repeated the response we’d already gotten. The guys on my team have never been asked to approach anyone like that.
– Lisa, an economist from Canada

‘Can you do some Moulin Rouge dancing?

A conversation about my partner being French elicited a question about if he had a sister. I responded ‘yes, but she’s 10’. He replied ‘I could wait a few years’ … he’s in his 50s, and he’s my boss. Then [we had] a conversation about presenting to senior decision-makers and it being a bit of a ‘song and dance act’. He asked me ‘Could you speak French to them?’ (yes). ‘How about some sort of Moulin Rouge dancing?’ There’s nothing wrong with working as an exotic dancer, but I work in a government office …
– CJ, a public servant from Western Australia

‘You can always tell them you’re female’

Studying electrical engineering and being told that IQ is inversely related to breast size by male students. Later, during honours, being told it’s OK for me to stuff up, I can always tell ‘them’ I’m female. This wisdom was via my supervisor who is a woman and mother of two girls. Go sorority!
– fknusrnms, via Witness

‘How can you be a sculptor when you have to lift heavy materials?’

I was introduced to a male student who was concerned with my career choices. His concern was stated as follows: how can you possibly be a female sculptor when you have to lift so many heavy materials? Thank you for your opinion but I’m sure we can manage.
– Katie Johnston, via Witness

‘Why are you dressed like you work in a strip club?’

While working as a digital consultant at a household name brand, I came to an informal meeting and one man loudly asked in front of my colleagues: ‘Why are you dressed like you work in a strip club?’ (I was wearing a knee-length straight skirt and high-neck short-sleeved blouse, opaque tights and flat shoes – huh? The blouse was leopard print). Colleagues were shocked. When I finished consultancy, I complained to HR who disciplined him.
– Zorra, via Witness

‘You look good in a tight skirt’

I once had a job interview, which went really well. I got the job and have since changed workplaces.

But the next week when I was at my (now former) work, I said to my boss, ‘One of the questions I got asked during the interview was what positive things would my co-workers say about me. What do you think is one of my positive aspects?’ He replied, ‘Well, you look good in a tight skirt.’
– Jane, a receptionist from Sydney

Most Guardian readers said even if they had experienced subtle sexism in the workplace, they didn’t take it any further.

As Bea, a former teacher from San Francisco said: “A former male manager made mention of the fact that the only female manager in the company had ‘slept her way’ into management. I was taken aback, but knew that were I to mention my distaste with the comment, then I’d be labelled ‘difficult’.”