RSS
← What If Another Business Uses Your Name?
Food retailers must protect pollinator species, too →

Why is it that women work a month more than men every year?

This woman better keep working while her male coworker takes a break if she wants to make up for the wages she’s losing by earning less than him. (Photo: KieferPix/Shutterstock)

It’s frustrating: I’ve been hearing since I was a little girl how women make less money than men for the same work. I figured that would change by the time I was an adult — but that stat hasn’t budged much. When I was 16, women earned 72 cents to a man’s dollar. My 40th birthday is just a few months off, and current estimates show that women make 78 cents to a man’s buck. (Both numbers are for women who work full-time, year-round jobs.) The forecast for the future is similarly cloudy.

It’s not because women don’t ask for the money we deserve; we do, and we don’t get it as often as men do shows this study by the Cass Business School in London. It’s not because women are less well educated, put less time in at work, or opt for lower-paying jobs overall, all ideas that have been debunked by studies in the past couple of years.

In fact, it has been noted that when women move into a field, the pay rate for that type of job goes down, according to a study that controlled for education, work experience, skills, race and geography. For example, when women entered biology and medicine, all biologists’ and doctors’ pay went down. Computer coding used to be dominated by women and it paid poorly, but now that it’s dominated by men, it pays well. There are plenty of examples like this that point to pure gender discrimination — work must be easier and is less skilled if women do it — as the reason women are paid less.

“It’s not that women are always picking lesser things in terms of skill and importance,” Paula England, a sociologist at NYU told the New York Times. “It’s just that the employers are deciding to pay them less.”

But wait, it (doesn’t) get better

On top of earning lower salaries, according to a new report by the World Economic Forum, women actually work more — to the tune of about 50 minutes more per day, or a whopping 39 more days per year. That’s because women do so much more domestic labor than men, in addition to working outside the home.

Men spend more time working outside the home, but worldwide, they don’t pull their weight when it comes to domestic chores, which tends to be both the drudge work and is unpaid. (Photo: Global Gender Gap Index/World Economic Forum)

The gender gap report looked at all aspects of life and estimated it will be 170 years before women reach gender equality in economic opportunity and political empowerment. That’s a long time.

What can women do about it?

Women in Iceland took their frustration over the pay gap to the streets. Earlier this week, working women there walked off the job at 2:38 in the afternoon to protest income disparity. Even though that country has the smallest pay gap of any in the world, women there still earn 14 to 18 percent less than men. That means, on an average eight-hour work day, women are working for free after 2:38 p.m. — so they quit for the day at that time to make a point. 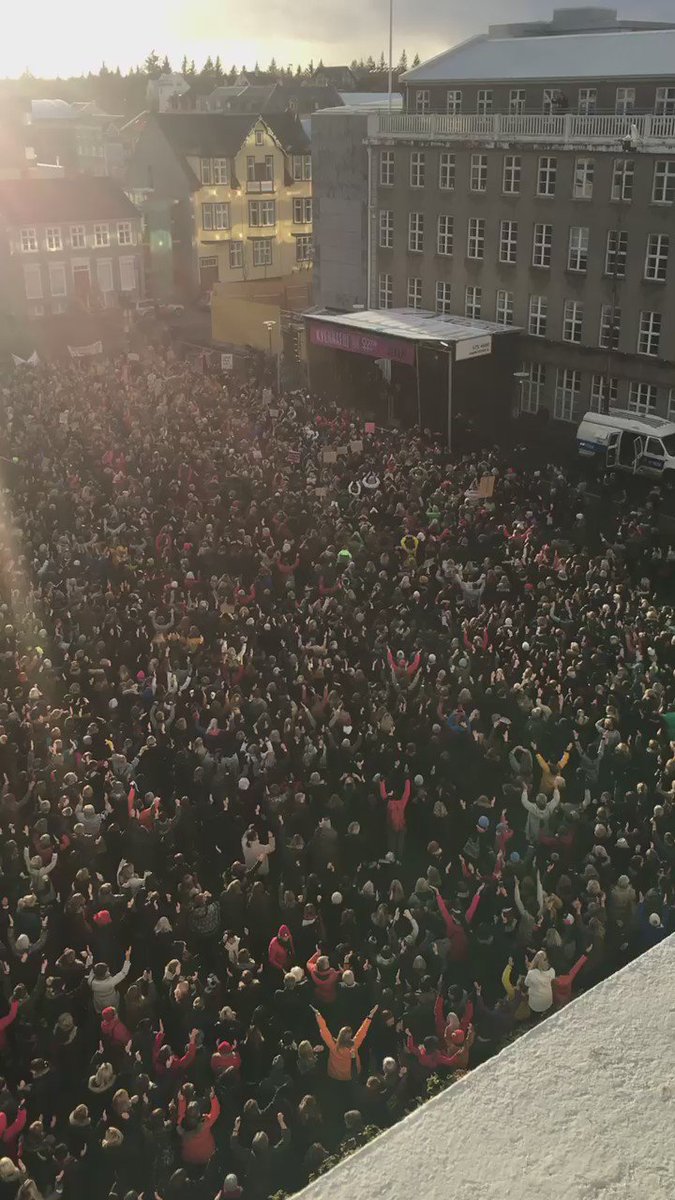 Iceland’s women have a long and successful history of fighting for women’s equality in that country. On Oct. 24, 1975, 90 percent of Iceland’s women went on strike during the first Women’s Day Off. They refused to work at paid jobs, do housework or look after kids that day. Some children were taken to work by men, while others stayed home, and stores were bought out of easy-to-prepare foods like sausages. Men called it the Long Friday. Meanwhile, the women gathered in public squares to listen to speeches, sing and enjoy the sunshine. (It was, apparently, a beautiful day.) More than 25,000 women showed up that day in Reykjavik’s Downtown Square, which is significant for a country that had a population of only 220,000 at the time.

Just five years after Women’s Day Out, the country elected its first female president, who held office for 16 years. Today, Iceland has the highest female participation in the labor market (88 percent), and 44 percent of Iceland’s parliament is comprised of women. In Iceland, childcare is subsidized at a high rate, and both men and women get three months of paid parental leave when they need it.

Still, there’s work to do. According to the data, it will take Iceland’s women 52 years to reach gender parity at current rates. “No one puts up with waiting 50 years to reach a goal,” Gylfi Arnbjörnsson, president of ASÍ, the Icelandic Confederation of Labor, told RUV today. “It doesn’t matter whether it’s a gender pay gap or any other pay gap. It’s just unacceptable to say we’ll correct this in 50 years. That’s a lifetime.”

← What If Another Business Uses Your Name?
Food retailers must protect pollinator species, too →