RSS
← With Trump out of the Paris climate deal, France looks to poach top researchers
How Will Current Politics Affect Facility Management? →

Can we use the shootings as an excuse to unite the parties?

Washington (CNN)Rep. Steve Scalise, a congressional staffer and members of the Capitol police force were shot Wednesday in Alexandria, Virginia, during Republicans’ early-morning practice ahead of a charity baseball game. 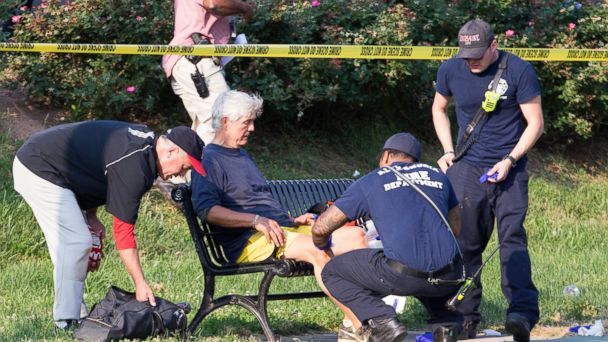 Another day, another shooting.  This time it was not a terrorist.  We think.  Who knows, who cares?  It has gotten so that I really dread watching the news any more. I have scores of friends who have dropped out of the social media sites, like FaceBook, etc.  They, like me, are weary of the election, the divisiveness, the killings.  We are weary of the hatred.  We are weary of ISIS, Conspiracy, Investigations, Russia, FBI, CIA. …   the word “recuse.”

Recuse:  challenge (a judge, prosecutor, or juror) as unqualified to perform legal duties because of a possible conflict of interest or lack of impartiality.  We have attorney generals that cannot be impartial?  God save us.

Back to that – God, indeed, save us.  Whatever your belief, whether it is Christian, Muslim, Jewish, Rhastafarian, Buhddist, or you just believe that the Mountains, Creator, or something is bigger and more powerful than I am.  Please compel it in whatever way you feel drawn to , to have it save us.

Save us from the hate, the shootings, the blaming, the contempt. Yes, the contempt.  I remember when people could respectfully disagree and still break bread and hug each other and  mean it.  It has gotten so bad, there are households that have broken up over Trump vs Clinton?  Goodness people, grow up!

People are dying in the streets and we are debating whether we feel the Warriors should go to the White House or get in a last snub at the president.  I’m not a fan (of the current holder of the office) but for goodness sake, GET OVER IT! First of all, it is the office of the President of the United States, not one single man.  Also consider this – What if Trump decides he doesnt want to handle the drama, and DOESN’T INVITE THEM?  What are we going to spew the pages of twitter with then?

We could, however slim the odds, use this latest horror to unify us.  There IS somewhere, back there somewhere, a great Country of hard working people that overcame all odds and braved all adversities to occupy this land.  Then, when the europeans that moved over took it from them…………..(oops.  That’s another story).

We could use this as a rallying point to begin to unify the two “parties.”  To acknowledge our differences but respect and cherish our bonds and the commonality of the human condition.  We all, after all, do want the same thing right?  We want to be fed, have a safe roof over our heads, have the love of community and family…we are a very blessed nation.  Yet we whine like two year old spoiled children being deprived a sucker.

In the imortal words of Antsy McClain “Can’t we all just get along?”

← With Trump out of the Paris climate deal, France looks to poach top researchers
How Will Current Politics Affect Facility Management? →