RSS
← WARNING: Bullshit alert – how do they get away with this crap? JOANNA GAINS TO QUIT FIXER UPPER AND SELL FACE CREAM
What are Thinking Distortion’s, how do they really affect me, and if intellect alone is not the answer, what is? → 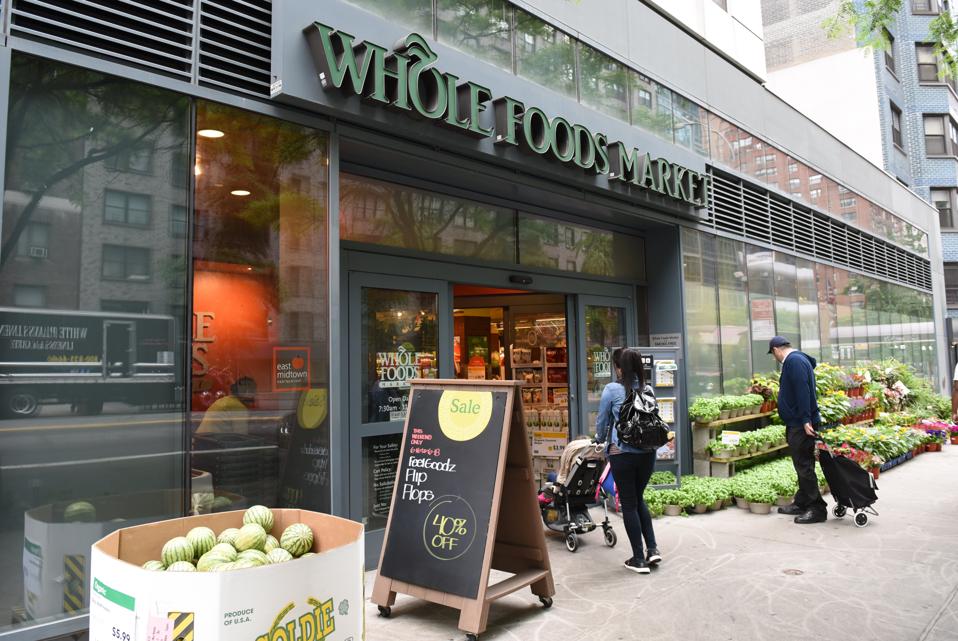 The size of the deal is atypical. Since listing its stock publicly in 1997, Amazon has acquired nearly 80 other companies, including movie-and-TV information provider IMDB, the video game streaming site Twitch, and the audiobook service Audible, among others. In all earlier acquisitions, Amazon has eschewed big takeovers. The biggest deal thus far has been the 2009 purchase of online shoe retailer Zappos.com, for roughly $1.2 billion — dwarfed significantly by the Whole Foods announcement.

Stranger still was the market reaction. Economists and financial analysts routinely conduct “event studies,” examining how markets react to firm announcement, whether the market views the investment announced by a company as value-enhancing or value-destroying.

To successfully acquire a target company, bidders often resort to paying an acquisition premium, that is, the difference between the estimated real value of the target and the actual price paid to obtain it. Amazon’s offer represents a 27% premium to Whole Foods’ closing price on Thursday. Similarly, when Microsoft MSFT +0.51% acquired LinkedIn for $26.2 billion, it represented a 50% premium. Last year, when AT&T T -1.32% announced their acquisition of Time Warner, it also paid a 35% premium.

In the short-term, therefore, the target tends to win, while the bidder loses. For example, as expected, LinkedIn’s stock rose 47% to $192.21 while Microsoft’s stock fell 2.6% to $50.14 immediately following Microsoft’s announcement. Between October 19 and October 26, 2016, AT&T’s market capitalization shrank by nearly $20 billion, while Time Warner’s surged by $8 billion. Traditionally, that is exactly what happens after a takeover is announced. Except, that is, when you are Amazon.

On Friday, Amazon’s shares jumped by 2.4%, adding another $11 billion to its market valuation, thus making the whole acquisition nearly free. Whole Foods’ stock, meanwhile, soared by 29% to $42.68 a share, the highest level since May 2015. Then on Monday, it closed even higher, at $43.22 a share.

So exactly what is so special about Whole Foods — which has been struggling with a long slump in sales and a recent reshuffling of its top management — that could take Amazon to new heights? Why are investors warm to what CNBC’s Jim Cramer has called “the most disruptive deal in ages?”

Not All Acquisitions Are Alike

In 2001, Harvard Business School’s Joseph Bower wrote an influential piece in the Harvard Business Review where he described how managers often mistakenly lump all mergers and acquisitions (M&A) together, which in fact, represents very different strategic activities, each presenting differing challenges. Mixing them only makes it harder for an M&A to pull off. That explains, in part, the abysmal track record confirmed by nearly all studies: 70% to 90% of mergers and acquisitions fail.

When a CEO wants to boost corporate performance, the most common form of M&A in a mature industry is to consolidate capacity. In May 2016, Nissan acquired a 34% stake in Mitsubishi Motors. Carlos Ghosn, CEO of Nissan said, “We have the potential to be in [the] top three.” Such is the business logic of “to eat or be eaten.” The parent company closes the less competitive facilities, eliminates overlapping functions, shuts down idle capacity, and improves operational efficiencies. The goal is to achieve greater economies of scale to lower overall costs.

Alternatively, top management may use M&As to jump-start long-term growth by embarking on a “geographic roll-up” or “product-market extension.” The parent company lets the newly acquired entity leverage the existing model to turbocharge growth. When Spinbrush was acquired, it gained immediate access to the distribution channels that P&G had nurtured over the years. When VMware was acquired, it tapped into a long list of existing EMC customers. Few changes with respect to strategy or operating models were required on either side. Synergy was immediate and apparent.

Obviously, what may seem a perfect match on paper may not be so in reality. The success of Pepsi-Cola’s acquisition of Frito-Lay, owing to the direct store delivery logistics system which PepsiCo had honed over the years, didn’t translate well when PepsiCo later acquired Quaker Oats. As the latter acquisition unfolded, managers at PepsiCo painfully discovered that its traditional warehouse delivery method had very little in common with that of Quaker’s, and consequently, the acquisition failed to meet the financial expectations.

Most interesting perhaps is the third type of M&A. It entails investing in a company whose business model has yet to be proven. The target company is often an upstart poised to disrupt an existing industry. The acquisition is as much about preempting future competition as it is about buying a disruptive business model. That’s what drove Wal-Mart to acquire Jet.com for $3 billion in 2016. The same can be said for Unilever’s $1 billion takeover of the Dollar Shave Club, or for General Motor’s $500 million investment in Lyft—made in the hopes of doubling down its ride-sharing efforts. Growth prospects notwithstanding, these startups were far from achieving profitability. However, they offered a promise to pivot the outmoded business of the established companies.

Viewed in this light, Amazon’s purchase of Whole Foods is truly in a class of its own. None of the conventional reasons can explain the acquisition. For one, Amazon won’t be consolidating the grocery sector. By the end of 2016, Walmart commanded the lion’s share with 14.45% in the food and grocery market. Whole Foods had a paltry 1.21%, while Amazon’s share was negligible at 0.19%. The product categories between Amazon and Whole Foods are also so distant that it’s hard to imagine a viable “one-stop shopping” strategy. It’s unlikely that quinoa lovers would pick up an e-reader or set of Wi-Fi speakers while shopping at Whole Foods. And Whole Foods itself is definitely not going to disrupt Amazon.

← WARNING: Bullshit alert – how do they get away with this crap? JOANNA GAINS TO QUIT FIXER UPPER AND SELL FACE CREAM
What are Thinking Distortion’s, how do they really affect me, and if intellect alone is not the answer, what is? →