So much for making the recipe more natural. People would rather eat artificial ingredients than give up vibrant colors.

The people have spoken. They’ve had enough of General Mills’ attempts to make its breakfast cereal more natural and want the old version back. In a surprising announcement made last Thursday, the company said it would do precisely that — reintroduce its classic Trix cereal, in all its artificial glory, because that’s what people want. 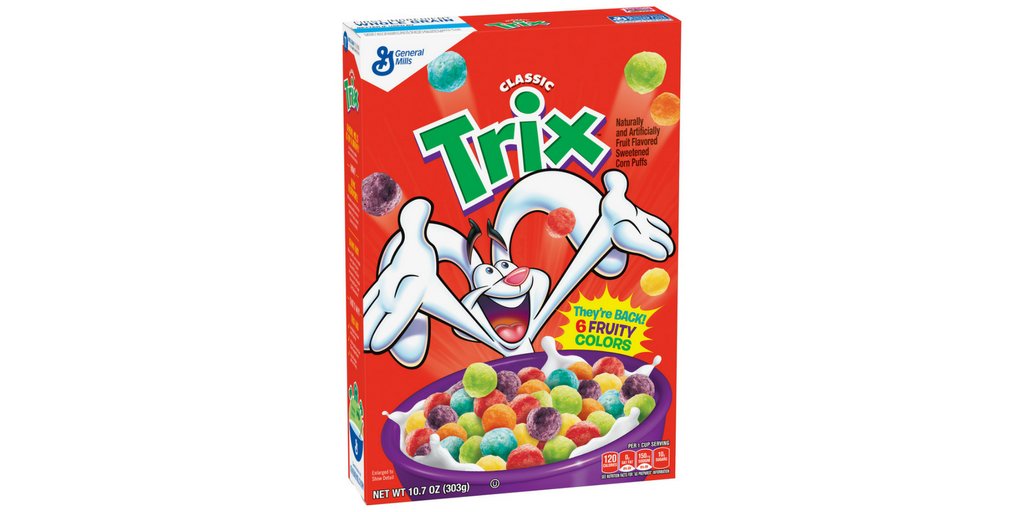 Ever since General Mills announced in 2015 that it would start phasing out artificial colors and flavors from all its cereals (an announcement that boosted sales by 6 percent in early 2016 and pleased many shoppers and scientists who have concerns about the health effects of these petroleum-sourced food dyes), there has been a parallel outpouring of protest from committed cereal lovers. People weren’t happy with the way the cereal looked or tasted.

“Part of the problem for Trix was that General Mills’ food scientists said they couldn’t replicate the vibrant red and neon blue-green corn puffs with fruit and vegetable juices. Besides producing a bland color, the juices and extracts gave the cereal a different taste.” (via Wall Street Journal)

The company received a barrage of comments and criticisms, such as “My childhood faded away with the colors of Trix cereal”; “It’s basically a salad now”; and “I genuinely feel bad for the kids that never got to experience the old Trix cereal.” The Wall Street Journal cited Ashley Carara, a mother from Denver, who wrote “Change it back!!!” on Facebook, shortly after the new Trix hit store shelves.

“[Carara] said in an interview Thursday she likes the way the artificial colors and high-fructose corn syrup look and taste. The new recipe, not so much. ‘My kids find the color of the new Trix cereal quite depressing,’ she said.”

The decision to go back to making Trix with Red 40, Blue 1 and Yellow 6 — and giving up on purple carrots, turmeric, and radishes — is a baffling move for those of us who care deeply about ingredient lists and are willing to trade colors and flavors for the peace of mind that comes with eating safer substances; but apparently that’s not the case for many Americans, who are deeply attached to their processed foods and would prefer to eat artificial ingredients than give up familiar vibrant colors.

I don’t understand it, but then — let’s be honest — I’d never buy a box of Trix cereal, whether free from artificial additives or not. I view it as equivalent to a box of sawdust when it comes to nourishing my kids and would not start their day with that. A bowl of porridge is more up my alley.

So maybe the problem is not so much about specific additives as it is about taste preferences, and the fact that many Americans think crispy, sugary cereal constitutes breakfast. As this amusing video from Vox points out, breakfast should really be called dessert because, when it comes to sugar content, it’s all the same.

General Mills has not announced any other reversals in its cereal recipes, such as Fruity Cheerios, which went all-natural recently, as well. WSJ says this is because it hasn’t received as many negative complaints. The company continues to struggle with its Lucky Charms recipe, as the marshmallows are “challenging” to make without artificial dyes. (You don’t say…)