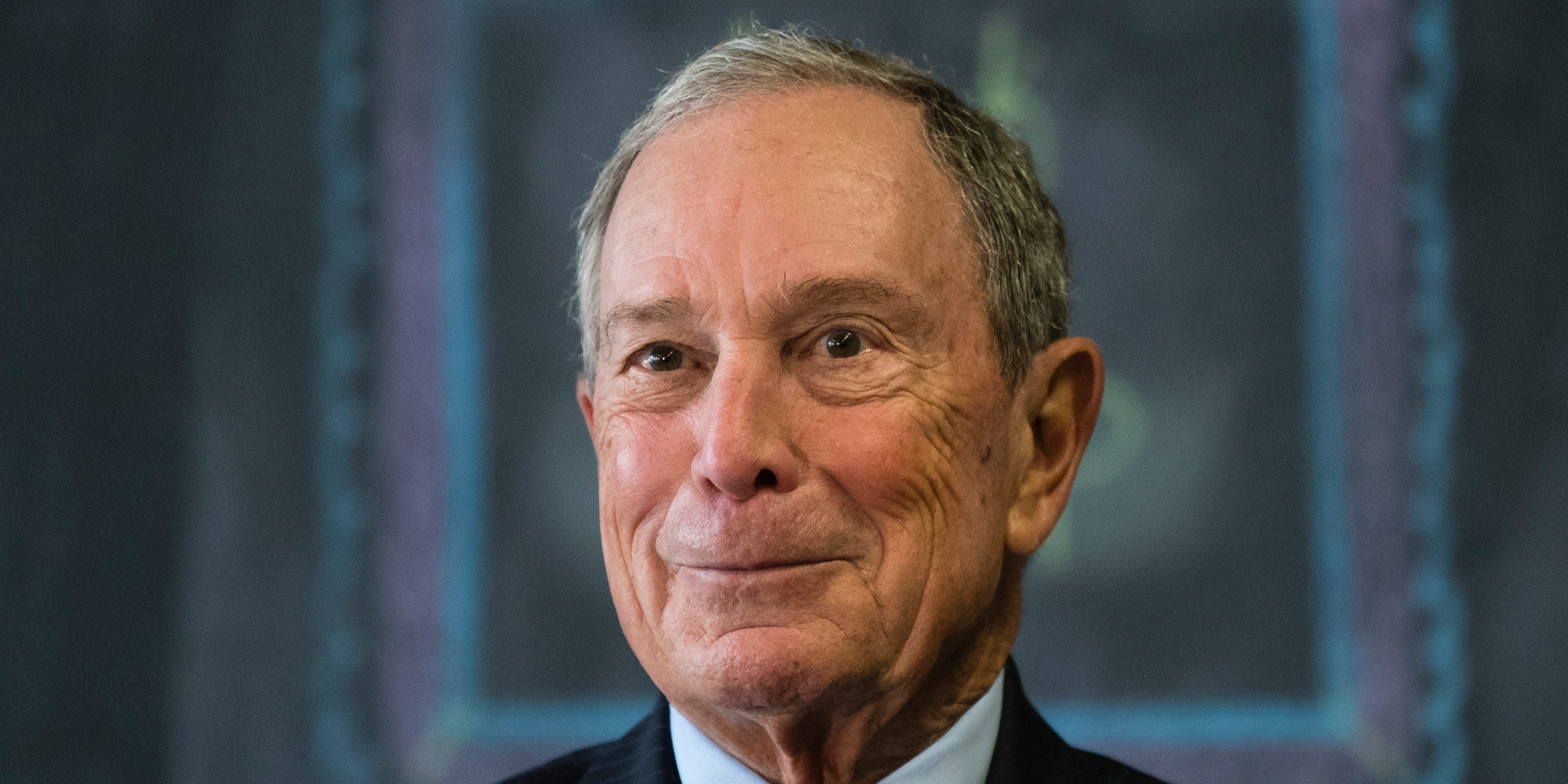 After weeks of speculation, the billionaire philanthropist and former New York City Mayor Michael Bloomberg officially announced he was jumping into the crowded 2020 Democratic presidential-primary field.

Compared with the rest of the field, Bloomberg is capitalizing on his wealth to run a highly unusual campaign. He’s planning to entirely self-fund his campaign and not raise any money through grassroots donations, meaning he won’t be able to qualify for any of the Democratic primary debates.

Even more unusually, Bloomberg isn’t filing to appear on the ballot at all in the first four key primary states — Iowa, New Hampshire, Nevada, and South Carolina — and he’s focusing entirely on winning delegate-rich Super Tuesday states, including Texas and California.

This strategy gives Bloomberg virtually no chance of winning the nomination. He would be not only forfeiting the ability to earn any delegates at all during the first four contests, but he also would be giving up the chance to prove to Super Tuesday voters that he is a viable candidate who can actually win elections.

Bloomberg and his advisers are arguing that defeating President Donald Trump should be Democrats’ first priority going into 2020, and they’re not confident the Democratic field is best-poised to do it.

But Bloomberg’s unique strategy might shed light on what his campaign is actually trying to achieve. As opposed to running a campaign based on the traditional methods of retail politics and heavily campaigning in those crucial early states to win the nomination, Bloomberg is using the most important tool at his disposal to shape the race: money.

It’s all about the ads

Bloomberg made an eye-popping debut into the 2020 fray by immediately announcing that he would spend $31 million on television ads for himself to air between November 25 and December 3 in 25 media markets in key primary and swing states, including Florida, California, Texas, Pennsylvania, and Michigan, CNBC reported.

According to Advertising Analytics, the $31 million purchase breaks a record for the most money spent by a presidential campaign on television ads in a week, a distinction previously held by former President Barack Obama, who spent $24.8 million in one week at the end of his 2012 reelection campaign.

For comparison, the amount of money Bloomberg is spending on TV ads in just one week is almost as much as the $33 million Sen. Bernie Sanders reported having in cash on hand in his third-quarter campaign-finance filing — far more cash than any other Democratic candidates reported.

But for Bloomberg, whose estimated net worth comes in at $52.4 billion, the purchase is just a small drop in the bucket.

And despite being the eighth-wealthiest person in the US, Bloomberg — who built a business empire on data analysis — presumably wants to shape the 2020 race in the most cost-effective way possible.

On the surface, it might seem like it would make sense for Bloomberg to just start a PAC to buy ads instead of going through the trouble of running for president.

But for a billionaire who plans to spend exorbitant amounts of money shaping the 2020 race, filing to run as a candidate and pay for ads through a campaign instead of simply starting a political action committee carries some significant financial advantages.

The Sunlight Foundation said in 2016 that the price of airing TV ads varied significantly by media market, but it’s almost always cheaper to buy ads as a political candidate than it is for PACs and super PACs — which can spend unlimited sums of money on electioneering.

Federal Communication Commission regulations require TV stations and networks to offer a price referred to as the “lowest unit rate” possible to presidential candidates based on the timing of their ad spot and how likely it is to be “pre-empted” or bumped by a higher-paying advertiser during “political protection” periods, which take place 45 days before a primary and 60 days before a general election, according to the veteran TV sales rep Mike Fuhram.

But none of those considerations apply to PACs’ and super PACs’ ad purchases, meaning stations can charge virtually as much as they want to PACs and aren’t required to offer them the lowest price possible in the weeks leading up to an election.

For someone, like Bloomberg, who plans to purchase a lot of anti-Trump ads, this means he could save a lot of money by buying ads as a presidential candidate instead of through a PAC.

In the 2016 campaign cycle, for example, the Sunlight Foundation found that while Hillary Clinton’s campaign was charged just $1,500 per ad to air three spots in the 10:00 p.m. hour on the CBS affiliated station KCCI in Des Moines, Iowa, KCCI charged Right to Rise, the super PAC affiliated with the Republican candidate Jeb Bush, double that amount, at $3,000 per ad, to also air ads during the 10:00 p.m. hour.

If Bloomberg’s top priority in the 2020 cycle is to help beat Trump, using his position as a candidate to air as many TV ads as possible for the best price could achieve a lot toward that end.

Despite the rise and increasing relevance of digital advertising, the Sunlight Foundation said that “television, especially the local newscast, still reaches a particular audience that campaigns want: older Americans who will vote.”

Even If Netanyahu Is Done, His Damage to Israel Will Linger for Years

Israeli Prime Minister Benjamin Netanyahu chairing the weekly cabinet meeting at the Prime Minister’s office in Jerusalem on Nov. 3, 2019.
BY AYELET GUNDAR-GOSHEN
Gundar-Goshen is the winner of the JQ-Wingate Prize for Waking Lions. She is a clinical psychologist, has worked for the Israeli civil rights movement, and is an award-winning screenwriter. Her new novel is The Liar.

For years, Benjamin Netanyahu’s followers used to sing in political gatherings “Bibi King of Israel.” Now, it seems like the king might lose his crown. Israel’s longest-serving leader is indicted for bribery, fraud and breach of trust. Netanyahu becomes first sitting prime minister in Israel’s history to be charged with bribery. While Bibi called the decision “an attempted coup,” his political rivals are celebrating.

However, the Israeli people have no reason to celebrate. Even if Netanyahu goes, the environmental damage he caused is here to stay. During a twenty-year political career, oil tanker “Netanyahu” has docked in the center of the Israeli mainstream, pouring gallons of hate into our water.

Netanyahu’s reaction to the indictment decision was a wild attack against the Israeli law system. While a “witch hunt” is a common, legitimate, metaphor often used by politicians in his situation, Netanyahu didn’t stop with this expression. His accusation of an “attempt coup” could become a real threat to our democracy, when expressed by a sitting prime minister towards the law system. Not many were surprised by this choice of words. The PM’s reaction yesterday fit his entire career. As we look at the rise and fall of leaders, we usually assume that the fall of a leader symbolizes the end of his era. But that’s not necessarily true. A leader can leave the public sphere the way a child leaves the pool after pissing in it.

Over the course of two decades, Netanyahu has delegitimized major parts of Israeli society in general, and the Palestinian citizens of the country in particular. In 1995, Netanyahu fought against Prime Minister Rabin’s efforts to proceed with Oslo Peace Accords. As the head of the opposition, he didn’t shout incendiary messages to the crowd, but he did stand onstage facing a raving mob, surrounded by a chorus of voices shouting, “Rabin the traitor!” Rabin’s wife refused to shake Netanyahu’s hand at her husband’s funeral, later calling him “the architect of incitement.”
Rabin’s death gave a frightening demonstration to how fast hate-speech turns into action. But the anti-democratic pollution only grew wider, as did the delegitimization of vast numbers of the Israeli public. In his 1996 election campaign, Netanyahu used a new slogan: “Netanyahu—good for the Jews.” The campaign set up a clear dichotomy between “Israeliness” and “Jewishness,” dividing the citizens of the country into Jews and non-Jews. Anti-Arab propaganda became explicitly outspoken in the 2015 elections, when our prime minister warned his followers that “Arab voters are heading to the polling stations in droves.”

A few days after the 2015 elections, a White House warning on anti-Arab rhetoric in Israeli elections was published. After all, it’s not every day that a prime minister tries to cast doubt on the right to vote of 20% of his country’s population. After the U.S. denounced his video, the Israeli PM apologized, saying he had been misunderstood.

The delegitimizations of the Arab citizens was followed by attempts to create fake history. During his speech to the Zionist Congress in 2015, Netanyahu claimed that Hitler’s genocide was inspired by the Palestinian leader of Jerusalem at the time, Haj Amin Al-Husseini. His remarks were criticized by prominent Holocaust scholars, and he later corrected himself.

Where there is hate speech by political leaders, sooner or later there will be a hate crime by “extremists” or “loners.” On Netanyahu’s shift, there were quit a few. One of the most shocking was the murder of a 16-year-old boy, Abu Khdeir, as revenge for the kidnapping and murder of three Israeli teens. Netanyahu was one of the first to denounce the murder of the Palestinian boy – yet he also denounced the writers who dared to write a TV series about the case. Netanyahu recently called on Israelis to boycott the Keshet and HBO-produced TV drama Our Boys, calling it anti-Semitic. Death threats to the creators were soon to follow the PM’s statement.

But the peak of Netanyahu’s latest hate campaign was his call to put cameras in polling stations, doubting the integrity of Arab voters. Ironically, it was Netanyahu’s insult that got more Arab citizens to vote.

Even if he loses the trial over bribery, Netanyahu has already won: delegitimization of the Arab minority is no longer limited to the extreme right wing. Netanyahu’s rival, Avigdor Lieberman, now considered “central right,” has refused to even sit in a chair randomly allocated to him in the Parliament, as it was next to the head of the Arab party.

A big part of the election impasse paralyzing the country today is another product of minority hate: Netanyahu sticked with the extreme right-wing parties, and preferred these allies over Gantz’s offer to form a more central coalition. He also rejected the idea of a rotation government in which he will be the second to serve.

Quite a few cheers were heard last evening in Tel Aviv, when the indictment decision was first published. However, If we ever want to recover from twenty years of anti-democratic pollution, we have to first acknowledge the fact that our environment is polluted with hate. We have to purify our society from anti-democratic tendencies. It will take a long time, so the sooner we begin, the better.