Left-leaning critics of U.S. President Donald Trump rejected his claims to overseeing unprecedented economic growth in early 2020. Who was right?

In February 2020, we received multiple inquiries from readers about the veracity of social media posts and news articles which claimed that the U.S. economy had added 1.5 million more jobs during former President Barack Obama’s final three years in office, than it did during President Donald Trump’s first three years.

On Feb. 17, Rep. Carolyn Maloney, D-New York, tweeted that Obama had “created 1.5 million more jobs in his last 3 years than Donald Trump has in his first 3 years.”

Earlier, the left-leaning Democratic Coalition group posted a link to a Yahoo! News article with the headline “Trump’s First 3 Years Created 1.5 Million Fewer Jobs Than Obama’s Last 3,” adding “FACT: New figures from Trump’s own Department of Labor show that 6.6 million new jobs were created in the first 36 months of Trump’s tenure, compared with 8.1 million in the final 36 months of Obama’s ― a decline of 19% under Trump.”

The issue for boomers won’t be ‘aging in place’ The real question will be, ‘How do I get out of this place?’

You can only do this for so long. (Photo: Mick Tinbergen/Wikimedia Commons)

The oldest baby boomers have just turned 70, and most can drive to their birthday parties. They’re being followed by 70 million other boomers, all happily motoring along. Their parents? Not so good these days. Janet Morrissey of The New York Times looks at the issue of transportation for senior citizens and sees a problem: lack of transportation.

It’s no longer enough to call a taxi or regular car service and hope that frail seniors can get in and out — or through the entrance of a doctor’s office on their own as the driver speeds off. For people requiring oxygen tanks and wheelchairs, it’s an even bigger challenge, and long waiting periods are often required to arrange for specially equipped vehicles.

Morrissey is interviewing people in their 80s and 90s but recognizes that this will be a growing problem.

“It’s going to become a massive phenomena,[sic]” said Ken Dychtwald, founder and chief executive of Age Wave, a consulting firm specializing in age-related issues. “This is an unmet need that’s going to be in the tens of millions of people.”

I read the article with increasing incredulity as she talks about new startups like RoundTrip and Circulation that provide rides. Reading it makes me want to scream in all bold capital letters: THIS ISN’T A TRANSPORTATION PROBLEM. IT’S AN URBAN DESIGN PROBLEM! Only once, in the entire article, did it mention that we are in this mess because of the great suburban experiment of designing our world around cars.

One woman who cannot drive because of a broken elbow complains:

According to Morrissey, 30 percent of patients skip appointments because they can’t get to them, and it costs the health care industry $150 billion per year. And these are serious Greatest Generation seniors, not baby boomers who are coming up next. The next 20 years will be a different story. Why? Because 70 percent of baby boomers live in the suburbs.

“With the population aging, we absolutely see a lot of growth in need,” said Jennifer Hartt, director of investments in health and digital health for Ben Franklin Technology Partners and an early investor in RoundTrip.

My first reaction was “well, duh…”. But baby boomers are dreaming if they think that services like RoundTrip can fill the needs of 70 million aging boomers.

What goes wrong first when you get old. (Photo: JCHS)

Baby boomers are looking around their houses and thinking “What can I do so that I can age in place?” and investing in renovations, when all the data show that one of the first things go to is the ability to drive — long before the ability to walk. Instead, they should be asking “What can I do to get out of this place? How will I get to the doctor or the grocery?” Every single one of them has to look in the mirror right now and ask themselves, “What do I do when I can’t drive?”

My mother-in-law’s house with that rusting Saturn in the driveway. (Photo: Google Maps)

I’ve written before about my late mother-in-law’s experience, about how it won’t be pretty when the boomers lose their cars. I keep going back to it because it was so horrible. In the last few years of my mother-in-law’s life, my wife Kelly spent two hours to take her mother to the doctor or the grocery. Joyce was lucky; Kelly didn’t work and could spend her day taking care of her mom. Not many people can do this. My own mom lived in an apartment in midtown and was within an easy walk (or wheelchair-push in her later years) to her doctor. She also had access to “wheel-trans” or special buses that transport people with disabilities; each ride costs the city $30.79. What happens when 70 million baby boomers start demanding transportation like that?

The problem is that we designed our suburbs and our newer cities around the car, so if you can’t drive, you[re trapped. As Sara Joy Proppe wrote in Strong Towns,

By designing our cities for cars, and consequently neglecting our sidewalks, we have siloed our elders in several ways. Not only does an inability to drive confine many seniors to their homes, but corresponding busy roads and inhumane streetscapes add to the isolating effect by also limiting walkability.

We have time to fix this

In 10 or 15 years, tens of millions of baby boomers will be in that position. That’s actually enough time to fix a lot of this. Walkable cities and towns have a way of turning into NORCs, or Naturally Occurring Retirement Communities. There are enough older people around to provide support services relatively efficiently. There are things for people to do; after my dad died, my mom took up bridge and played for years; she hated cards, but knew she needed to keep doing things, and there were people in the building she could befriend through bridge, so she played cards.

This is why we have to stop thinking of this as a transportation problem; it’s not. It is also why people have to end this fantasy of aging in place in the suburbs, trapped in their own little worlds. Instead they should think about moving to where they can actually get out of their homes and do stuff — meet people, shop or go to the doctor.

If urban planners and the politicians they work for had any sense, they would stop approving any more suburban sprawl and do a big intervention to allow mid-rise apartment construction everywhere in city centers where there is transit and pedestrian infrastructure that lets people get to their doctors and grocers without needing a car. Or they would adopt the principles of New Urbanism and make every new community walkable.

Google’s cute little self-driving car of the future is no longer a thing; they have moved on. (Photo: Google)

Instead, they either ignore this problem or pronounce, “Self-driving cars, autonomous vehicles will save us!” (In fact, we have said that right here on MNN.) 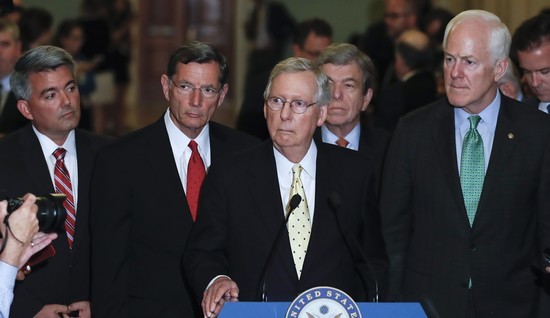 Attribution:
The gravedigger of American democracy, center.
They’re Not Stupid, and They’re Not Spineless. They’re Evil. Let’s Keep That Straight.

In reading comments left on various social media forums, one often sees Republican politicians described as “stupid”, “clownish”, “ignorant”, “spineless”, “cowards”, “gutless” and the like. We see them ridiculed for believing in conspiracy theories and for believing Trump’s breathtaking lies.

To this I say: get real.

Yes, a great many Republican officials do deserve the descriptions above. Louie Gohmert in particular is one of the most wretchedly idiotic adults of whom I have ever heard. But let’s cut through all of the idiocy and nonsense he and other Republicans spout.

They KNOW they’re lying. They know Trump is lying.

They do NOT believe the idiotic conspiracy nonsense they babble about.

They are FULLY AWARE of what they are doing.

They simply don’t care. Whatever it takes for them to win, they will do. They will gleefully feed the hatreds, fears, and irrational beliefs of the Republican base. They will feed the base non-stop bullshit 24/7, if that’s what it takes to get these people to vote against their own interests, even against their own children’s futures.

They are enthusiastically FOR Trump and the horrible Republican programs that are so destructive and harmful to the American people. They may not like Trump as a person, and may in fact despise him. But they love Trump’s racism, his hatred of “uppity” women, the way Trump shovels money into the pockets of the rich, the wildly unqualified right-wing nutjobs Trump is putting on the Federal bench, and the way Trump grinds the faces of the poor and sick into the ground. They get off on it, as a matter of fact.

They are not stupid. They are not “spineless” in bending to Trump’s will. They share that will.

These people want unlimited, unfettered, unrestrained, unaccountable power. They want this power to enrich themselves, enrich their friends, maintain their social status, and forcibly impose their so-called “values” on everyone else. These people do not—DO NOT—believe in the principles on which a democratic republic rests. In fact, they emphatically reject them as “mob rule”. Being “conservatives” (a word the meaning of which has been utterly distorted), they advocate the same things American conservatism has always advocated: rule by a small group of wealthy white men. Because there’s a phrase in the Declaration of Independence they hate with the heat of a thousand suns:

We hold these truths to be self-evident, that all men are created equal, that they are endowed by their Creator with certain unalienable Rights, that among these are Life, Liberty and the pursuit of Happiness.

American conservatism has waged unrelenting, bloody, savage war on this idea for 243 years (even though the idea’s author, Thomas Jefferson, didn’t really believe it himself). Resisting the inclusion of entire categories of Americans from the protection of the law is the zen essence of conservatism. And in Donald Trump they see a chance to win the final victory in this war.

They will use ANY tactic. They will threaten us with “Second Amendment solutions”. They will encourage hatred and egg on violence. They will keep the guns flowing to obtain NRA money and reward gun manufacturers for contributions, consequences be damned. They will lie.

So do me a favor. Look at someone like Moscow Mitch McConnell or an outright criminal like William Barr and tell me they’re not smart or that they’re weak. They’re neither.

They’re evil. And so are the rest of these bastards.

This is what we’re up against. The evil, corrupt, anti-American Republican Party.

Posted by steve@bayintegratedmarketing.com on February 20, 2020 in Uncategorized