Category Archives: what is happiness

Walking out to protest gun violence? Robert De Niro just wrote a note to your principal.

On April 20, students from more than 2,500 schools nationwide will walk out of their classrooms to protest gun violence.

At 10 a.m. on the 19th anniversary of the Columbine shooting, students across the country will drop what they’re doing and leave their classrooms behind as part of the National School Walkout.

The walkout is continuing an important national conversation that has begun in the wake of the mass shooting at Marjory Stoneman Douglas High School in Florida. Teens are refusing to let the debate fade from public consciousness until gun laws change.

Students will participate in a variety of activities organized by the leaders of that school’s walkouts. While some may return to class —  several school districts have already issued statements saying that not doing so will result in disciplinary action — others will march on their local lawmakers’ offices, call on the government for widespread gun reform, and register people to vote.

Some will, in accordance with the wishes of the officials at Columbine, participate in a day of service.

The protests have received widespread support. But one actor went even further to stand in solidarity with America’s students.

Robert De Niro, a vocal critic of the NRA and now ally to the #NeverAgain movement, has penned an absence note for anyone who’s planning to take part in the walkout.

Didn’t expect De Niro to be the one to get all those students out of class? He’s got compelling reasons.

The letter, shared by the National School Walkout’s official Twitteropens with an appeal to educators to understand that they and De Niro want “a safe nurturing environment for [student] education and growth.” Then, De Niro outlined all the reasons he’s asked educators to excuse his children in the past, making it clear how those reasons are relevant to the walkout.

“Gun violence is a devastating disease,” he wrote under the heading of “health.” De Niro goes on to make the case that the walkout is an example of good citizenship — “This is what good citizenship is all about” — and education.

“What an opportunity to teach these kids history by encouraging them to make history,” De Niro stated. “Let them learn about the American tradition of protest for change as they experience it.” 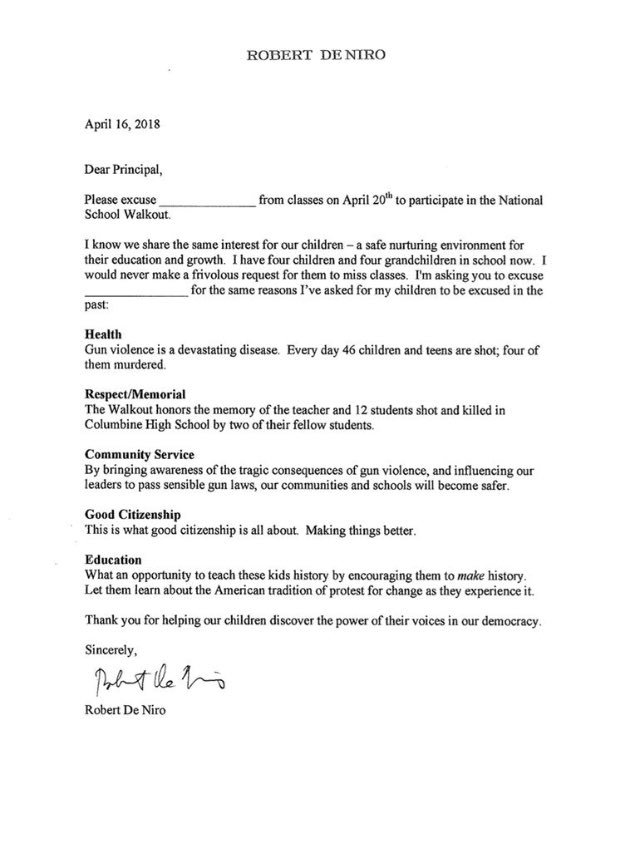 Would most principals accept this letter? No. But it’s an urgent reminder to stand with the students.

The walkout is important. There’s no argument about that.

But it’s not about just a call for change; it’s a demand that, as a country, we don’t become desensitized to gun violence. The walkout’s creator, high school sophomore Lane Murdock, lives just miles from Newtown, Connecticut, the site of the 2012 Sandy Hook shooting. She said the idea for the walkout came to her after she realized that her own reaction to the February 2018 shooting at Parkland wasn’t one of sadness or fear.

“I really felt quite numb to it. Our whole country is pretty desensitized to gun violence and once I realized I was, too, it really scared me,” she told USA Today. “I was no longer surprised that people were dying. That shouldn’t be the case.”

Survivors of gun violence call for change at the March for our Lives rally in Washington, D.C. in March 2018. Photo by Chip Somodevilla/Getty Images.

De Niro’s note is a good start, but here’s hoping that parents and adults see it and decide to write notes of their own — or, even better, also sit down with their teens to discuss what the walkout means and the impact that young people can have in the world.

“Keeping up the momentum is important,” said Murdock. “We saw that low after March for Our Lives, but students aren’t quitting on this. Our generation is demanding change and won’t be ignored or swept under the rug.”

When a dog “hugs” you, they might just be trying to stay alive. 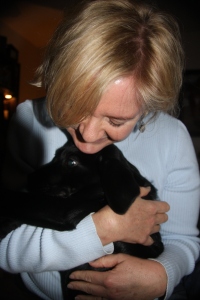 A few weeks ago we noticed irregular breathing, and certain listlessness when our Lab puppy is playing.  I happen to suffer from an occasional bout of Atrial Fibrillation, ( a form of arrhythmia)   so was convinced that it might be the case in our pup.  My wife and I grew very concerned and had her “Lexie” checked out.  Nurse couldn’t hear anything.

Last night, we heard it again. Wife was freaked out, and I sat down and really listened.  “A-fib” is an almost random contraction of the Atria of a human heart and can yield some pretty wild syncopated rhythms .  That is not what I heard last night.  The beat was irregular, but it was ON beat.  What they call Serial in heart terms. I did some research and found this posting:

Q. My 1-year-old dog has an odd heart rhythm. It goes thump… thump, thump, thump…thump. I am so very worried. What should I do?

A. You have done an excellent job of recording your dog’s heart rhythm. Your description of the thumping almost perfectly describes a sinus arrhythmia, a normal heart rhythm which can sound alarming at first. During sinus arrhythmia, the heart rate increases when your dog breathes in, and then slows down while he is breathing out. As long as this variation is regular, it is completely normal. You may want to listen a little longer to make sure this is true.

Did you know that an EKG (heart rhythm test) will change if there is another heart within 10 inches of the one being measured? The energy put out by one heart will affect the energy of the other heart. This is the reason you should hug your loved ones often, human or dog. Let them feel your love.

This explains lots.  When Lexie sleeps in our bed, she always nuzzles her back into my chest so that she can feel my heart.  In the morning , when I first sit down on my easy chair to begin working on my laptop, she will stand up on it and drape herself over me so that our chests are pressing against each other.  I never knew this, but she is feeling my heart beat.  The first time she  did that, I WAS in A-FIB and I swear she picked up on it.  That was the first time my wife noticed her irregular heart beat.

When i am “normal” or sinus, now, I think she uses my heart to help regulate her own, much like they do their mothers hearts when they are in the pack as little ones.  I wont be so quick to push her away because I am busy, or have to pee and she is standing on my bladder.  A little human time might just be what she needs to keep her heart healthy!